Depressive disorders affect up to 25% of young people by the age of 18 and account for the greatest global burden of disease in young people[1].

Despite this, many young people do not seek help.  It’s true that in Australia we have seen an increased focus on youth mental health [2-4]. We have also seen a doubling in the rate at which young people seek mental health treatment [5, 6]. Nevertheless, there are still large numbers of young people who are not receiving any treatment for depression [6, 7]. Untreated depression can result in disruption to academic and vocational achievement [8-10], interference with social relationships [11, 12], development of co morbidities and chronic illness [13], and is associated with greatly increased risk of suicide [14-17].

There are many potential barriers to seeking help, but a key barrier is poor mental health literacy in that young people have difficulties recognising symptoms as a mental health problem requiring intervention [18, 19].

An initiative by Google, where people searching with the word ‘depression’ are directed to complete a depression screening tool, represents an important step in helping people recognise they may have depression. This tool could have a role in promoting early detection and treatment of depression. While there are many tools available online purporting to assess depression, Google have utilised the PHQ-9, which is backed by a large amount of research. The PHQ-9 has been used in young people, although Google might consider including the PHQ-Adolescent version of this measure for use in younger people [20].

What is critical in this initiative is that those who screen positive for depression online are reassured with messages of hope about the availability of effective interventions for depression, and they are provided with information about how to access these interventions.

Access to treatment remains a challenge in most countries [21], but, again, the Internet offers a solution given the rise of technology-based cognitive-behavioural therapy (CBT) interventions [22] that can be rolled out on a large scale.

Evaluation of Google’s initiative to measure any adverse outcomes, and the impact of the initiative on mental health literacy and help-seeking, should be embedded in Google’s venture into depression screening. 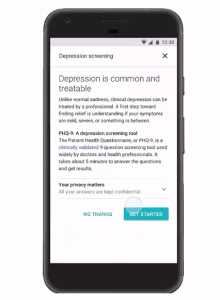 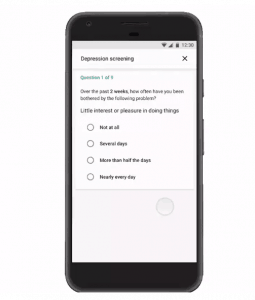