Don’t forget to focus on the negative

Negative symptoms in psychosis are under-researched and often receive less attention than positive symptoms. However, they are critically important to functional recovery, and should not be forgotten by early intervention services.

What are negative symptoms?

Negative symptoms are an oft-neglected but core feature of schizophrenia and other psychotic illnesses. Broadly speaking, negative symptoms refer to the loss or diminution of normal functions related to motivation and emotional expression. This includes symptoms such as reduced social interaction, loss of motivation, reduced speech and loss of enjoyment in previous interests.

Despite receiving less attention historically than positive symptoms, negative symptoms are in fact prevalent in the early course of psychotic disorders, and they are among the most frequently observed symptoms in the prodromal phase (ie, symptoms experienced in the lead-up to a first episode of psychosis). Importantly, negative symptoms are critically associated with poor psychosocial functioning, increased likelihood of unemployment and greater burden for carers in people with early psychosis.

Why are they important?
Primary negative symptoms (PNS) are regarded as intrinsic to the illness process of psychotic disorders, while secondary negative symptoms stem from co-occurring conditions, such as depression, paranoid suspiciousness, antipsychotic-induced motor effects and environmental deprivation. Persistent PNS robustly predicts concurrent and longitudinal functional impairment in people with early psychosis.

Amotivation may be a key determinant of functional outcome in early psychosis, having a greater effect than cognitive deficits and other symptom dimensions.

Amotivation has been found to be more prevalent in the early stage of illness, and is a much stronger predictor of functional disability than diminished expression. Amotivation may be a key determinant of functional outcome in early psychosis, having a greater effect than cognitive deficits and other symptom dimensions.3 Of note, it is well recognised that a significant proportion of people with first-episode psychosis (FEP) still experience persistent functional impairment even after achieving remission from acute psychosis. This indicates that negative symptoms, especially amotivation, might be a pivotal therapeutic target in promoting early functional recovery in first-episode populations.

How do we manage them?
Although negative symptoms don’t respond well to medication, early detection and intensive phase-specific intervention for FEP can be effective in reducing negative symptom severity. Recent reviews have revealed that shortening delays in treatment for an initial psychotic episode (i.e., reducing duration of untreated psychosis) is associated with fewer negative symptoms at first presentation and better negative symptom outcome at follow-up.

Integrated early intervention services are effective for improving negative symptoms among people with FEP. There is also growing evidence that specific psychosocial interventions such as cognitive-behavioral therapy (CBT), cognitive remediation and social skills training can effectively alleviate negative symptoms.4 In particular, CBT that specifically tries to rectify unhelpful attitudes, including defeatist beliefs and low self-efficacy, has recently been shown to significantly improve amotivation and functional outcome in people with psychotic disorders.

As negative symptoms constitute a major barrier to functional recovery in the early phase of illness, it is crucial to incorporate regular, comprehensive assessment of negative symptoms within the early intervention framework. This will aid evaluation and enhancement of functional outcome in people experiencing a first episode. Specifically, to accurately capture the nature and magnitude of symptom severity, the use of second-generation negative symptom rating scales (i.e., Brief Negative Symptom Scale, BNSS; Clinical Assessment Interview for Negative Symptoms, CAINS), which are were developed according to the current conceptualisations of negative symptoms and cover the five consensus domains, is recommended. This will in turn facilitate early symptom identification and provision of prompt, targeted interventions to prevent progression towards persistent negative symptoms and subsequent deterioration in functioning.5

Careful assessment should also be conducted to differentiate between primary and secondary negative symptoms, as the latter can be treated by managing the underlying cause.2,5 For instance, antidepressant treatment for depression or antipsychotic dose reduction for motor effects.

Optimising treatment of negative symptoms is critical to attaining functional recovery in patients with early psychosis. Further research is warranted to clarify how early intervention services should be modified or which treatment elements should be strengthened so that the benefits of treatment are sustained after a person leaves early psychosis care.

Dr. Wing-Chung CHANG is a psychiatrist (FRCPsych, FHKCPsych), a clinical associate professor at the Department of Psychiatry and a principal investigator of the State Key Laboratory of Brain & Cognitive Sciences, University of Hong Kong (HKU). He has been working in early intervention service for psychosis, namely the EASY programme for 15 years. His research interests include early intervention and outcome of first-episode psychosis, negative symptoms and amotivation, at-risk mental state and psychosis prediction, and physical health in severe mental illness. He has published 145 articles in international peer-reviewed journals and 4 book chapters. He has received several research awards including International Early Psychosis Association Young Investigator Award, and NARSAD Young Investigator Award by Brain & Behaviour Research Foundation. 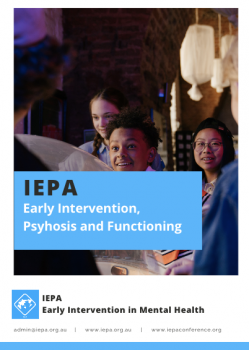 Declaration of Interests: None

This project was made possible thanks to a sponsorship from H/Lundbeck A/S. The opinions expressed in these materials do not necessarily reflect those of H.Lundbeck.

IEPA welcomes members from all fields of endeavour, and encourages diversity in the countries of residence, professional backgrounds, and levels of expertise and interest of its members.