Every two years, at our biennial conference, IEPA has awarded the Richard Wyatt award to an individual who has made a remarkable contribution to the area of early intervention. 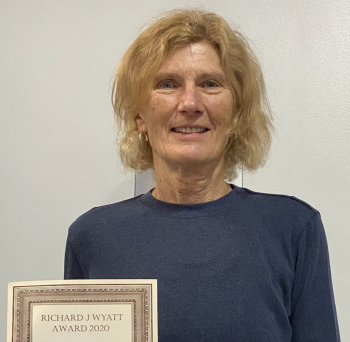 This year the award was presented virtually, at IEPA12 Virtual to recipient Professor Jean Addington. Jean Addington, Ph.D. is Professor of Psychiatry at the University of Calgary in Alberta. She is a Fellow of the Canadian Academy of Health Sciences (CAHS).

For over 20 years Jean has worked as a researcher, clinician and educator focusing on psychosis and schizophrenia, with a particular focus on early identification and treatment of individuals who are at risk of psychosis. Prof. Addington was instrumental in founding the Early Psychosis Program in Calgary, Alberta and directed that program until 2002. She also helped establish the Prevention through Risk Identification, Management and Prevention (PRIME) clinics in Calgary and in Toronto.

Jean has been an IEPA member since 1998 and has been an active participant of the IEPA over many years. She is a former Board Member and Past President and has chaired the scientific committee for our biennial conference on several occasions.

On behalf of the IEPA, warm congratulations to Professor Jean Addington, the 2020 recipient of IEPA’s Richard Wyatt award.